Several space agencies have succeeded in robotic and human lander missions [14]. This history dates back to 1957 when the first artificial satellite Sputnik 1 was successfully placed in Earth orbit. Between 1959 and 1976, the Russian Luna program successfully launched 15 missions to the Moon including two Lunokhod vehicles. These included TV cameras for navigation and science operation. In the same period, Russia launched a series of spacecraft, including landers to Venus that successfully transmitted image data back to Earth. Attempts to deploy a lander on Mars, however, were unsuccessful during that time on occasions since. The history of robotic missions led by the US American space agency NASA (National Aeronautics and Space Administration) reaches back to 1963 starting with two extensive programmes (Ranger and Surveyor’s surface. More than twenty years later, on July 4, 1997, Mars landings resumed, with the successful raising huge public interest and being a highlight of the emerging Web dissemination for many years. More recent successful missions to Mars include the MER (Mars Exploration Rover) missions discussed above and the Phoenix lander. JAXA (Japan Aerospace Exploration Agency), the Japanese space agency, successfully placed a lander on the asteroid Itokawa. Although a number of problems arose during the sampling operation, the spacecraft finally returned to Earth grain samples of Itokawa, as was publicly announced in November 2010 [86]. 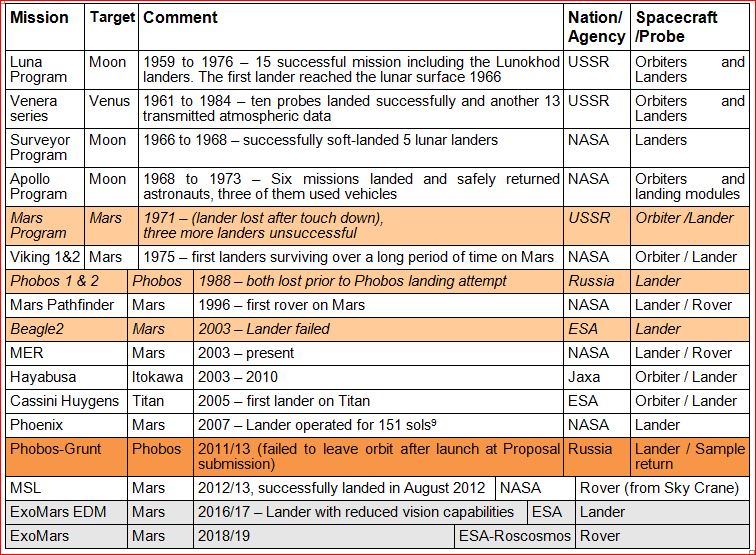