Similar to what is shown later for Orbiter data of different resolution (see Figure 12), the same procedure can be continued down to microscopic level. MER (Mars Exploration Rover) data already provides quite mature means of spatial data description documented in the PDS (Planetary Data System) labels attached to the EDR (experiment data records). To give an example, Figure 9 shows the result of fusion between NavCam (Navigation Camera) stereo and PanCam (Panoramic Camera) stereo reconstruction, and a Microscope image overlaid on the NavCam (Navigation Camera) structure and texture. Such combinations are possible without major effort due to the excellent local image orientation quality provided by the PDS (Planetary Data System). PRoViDE (Planetary Robotics Vision Data Exploitation) systematically search the MER (Mars Exploration Rover) EDRs (experiment data records) for such opportunities and produce 3D fusion results similar (or expectedly in higher quality) than those presented here by a prototype processing chain. As implication of that experiment, minor manual alignment effort in the range of 2-5 minutes is expected to precisely overly the MI 2D or 3D data onto the lower resolution products. 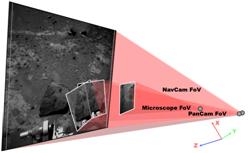 [1] Data was captured between Sol 2095 to Sol 2121, when the Opportunity Rover stayed in the same position at ‘Marquette Island’, and captured a great amount of different image types, such as PanCam, FHazcam, Navcam, and Microscopic Imagers.
We use cookies to ensure that we give you the best experience on our website. If you continue to use this site we will assume that you are happy with it.OK