Luna 17 (a Mars Mission) landed on the surface of the Moon on November 17, 1970 and deployed the roving vehicle Lunokhod-1, the first remotely operated rover ever to explore a planetary surface. Within 332 days, the vehicle conquered a traverse of approximately 10.5 km. On January 15, 1973, Luna 21 deployed Lunokhod-2, which traveled 37 km. Both rovers were equipped with stereo navigation camera system as well as a scanner camera with which panoramic images were obtained and transmitted to the ground. From separated stations, stereoscopic views of long baselines were obtained. Though early mission scientists have produced topographic map charts (Figure 3), these data have never been processed by modern image processing techniques and therefore constitute a precious data source yet to be exploited. The history of the Lunokhods came back into focus recently, when the Lunar Reconnaissance Orbiter obtained images from orbit at highest resolutions of 0.5 m/pixel. The Luna landing platforms as well as the roving vehicles at their final resting positions can clearly be identified (Figure 4). In addition, the rover tracks are clearly visible in most areas (see Figure 5 for an example). From the LRO (Lunar Rennaissance Orbiter) stereo images, topographic models of the Lunokhod-1 landing site areas have been derived [99], from which the topographic profile along the traverse can be obtained. Also, comparisons are possible with the topographic models that have been obtained by the Lunokhod cameras. The data are also useful to study the morphology of craters in the surroundings.

The historic Lunokhod data on digital tapes and negative films, are physically located in the Moscow State Archive, currently difficult to access by the public. Little housekeeping information are available for the precious data set. For most images, it is not possible to readily obtain the information on time and place from where they were taken. Also, camera-parameters, essential for photogrammetric processing of images, are not easily recovered. Limited information are available in few books and journal articles (Russian only). As new missions to the Lunar surface are being planned, it is of utmost importance to access all available Lunar surface data. 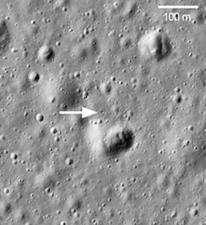